Posted on January 15, 2016 by andrepartridge

In a nutshell here is the sales perfomance: 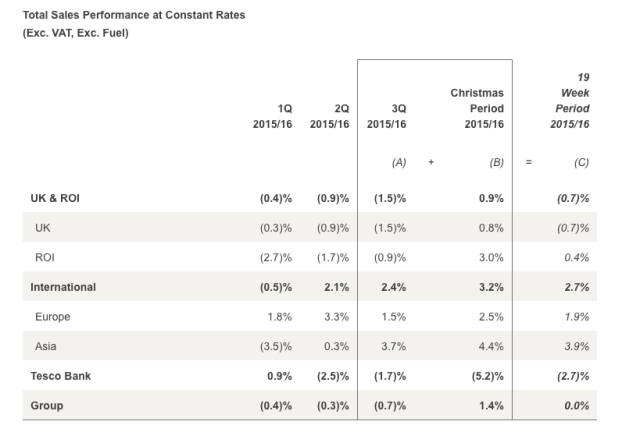 A big shift of 6% on the opening morning of the Tesco results! Finally a positive outcome for them in a very bleak 18 months/2 years, finishing just shy of a rise of 5%.

Like for like sales are up 1.3% over the christmas period compared to last year. Compare this to a 0.2% improvement for Morrisons, and a 0.4% dip from Sainsburys. Tesco’s has very much so outperformed the other turmoil supermarket. Meaning investors will be assessing the security of owning Sainsbury’s shares, and more importantly, starting to look at whether Tescos, priced at 166 is in fact cheap. The shifting in prices to compete with ASDA is paying off nicely for both investors and also the day shoppers (Tesco slash prices to keep up with ASDA)

Its not a dead set growth stock yet, but its certainly picked itself off the ground and brushed itself off. The best thing for Tescos now is solid year on year growth for stability. Another fiasco with the accountants could mean the end of such a big company. Surviving one brush in with the accountants has been tricky, two would be near impossible.

An interesting and unusual hidden gem..

A strong performance in its clothing brand. Tescos female fashion (fashion used lightly as a term) is putting in an impressive shift in the recovery.

Overall its safe to say there is a light at the end of the tunnel with the latest statement. However there is a long way to go. Its not a stock I would buy and leave to work its magic. Its a stock I would take a lot of time and interest in, reading between the lines of what is going on in the headquarters. One thing I will be sure to look out for is whether there is a continued push to close shops and curb their expansive ways of the past, or will there be a few more mega stores added to their property portfolio…

andrepartridge@googlemail.com
View all posts by andrepartridge →
This entry was posted in Uncategorized. Bookmark the permalink.